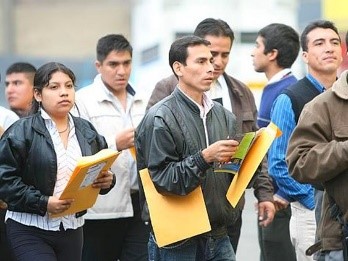 Before the pandemic, Lourdes Cuadros had two jobs in Peru. “I worked in a cinema at dawn and made garments in a workshop during the day. After the pandemic, I was jobless”. Like her, many workers were pushed into informality as the COVID-19 crisis hit the country: 78% of workers in Peru are now in the informal sector. This high incidence is aggravated by the low levels of social security coverage.

As part of the SP&PFM Programme, Governments of five countries received support in designing or improving unemployment insurance schemes: Bangladesh, Ecuador, Myanmar, Peru and Sri Lanka. The proposed schemes were designed in line with international social security standards and enabled institutional progress towards the ratification of two ILO Conventions covering unemployment insurance in Peru and Ecuador.

The SP&PFM Programme in Bangladesh conducted a preliminary feasibility study for the introduction of an unemployment insurance scheme and facilitated tripartite plus consultation that culminated in the development of a final assessment report and recommendations for the way forward. The Ministry of Labour and Employment committed to developing an Unemployment Insurance design during the project closure event on 31 March 2022. The Ministry Secretary stated that the Government had then a clear picture of where they stood on unemployment protection measures and what would need to be done in the future.

The SP&PFM Programme in Peru has succeeded to deliver a proposal for the establishment of a Comprehensive Unemployment Protection Scheme in the country, based on two pillars: income security and employment promotion. Robert Steinlechner, EU Head of Cooperation in Peru, highlighted that the issue of social protection is a cornerstone in times of recovery as well as in other times. “Social protection is not an expense, but rather an investment”, he stated. Through technical assistance and facilitating social dialogue, the project in Peru prompted an administrative process for the institutionalization of the scheme through the ratification of the ILO Conventions C102 – Social Security (Minimum Standards) Convention, 1952 (No. 102) – Part IV and Employment Promotion and Protection against Unemployment Convention, 1988 (No. 168).

Similarly, in Ecuador, the SP&PFM Programme developed scenarios for a possible reform to improve the current unemployment insurance system, including strengthening coverage, adjusting qualifying conditions, sufficiency, sustainability and better integrating the systems with employment promotion measures. Following this technical and advocacy work for better unemployment protection in the country, the Ministry of Labour started the process towards the possible ratification of the two relevant ILO Conventions.

In Sri Lanka, the Programme contributed to the implementation of the National Social Protection Strategy by establishing a framework for an unemployment insurance plan based on a contributory scheme. The ILO brief on social protection and the COVID-19 crisis in Sri Lanka highlights that “as well as protecting workers, unemployment insurance schemes are well recognised for their ability to boost aggregate demand within the economy during a crisis and reduce the depth of economic downturns”.